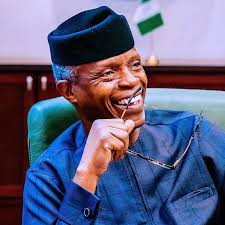 Vice president Yemi Osinbajo has reportedly apprised President Muhammadu Buhari of his intention to contest the presidential ticket of the All Progressives Congress (APC) for next year’s election.

According to the Daily Trust report Monday, which quoted sources, Osinbajo approached the president to inform him of his desire to inherit his position at the end of the tenure in May next year.

The newspaper reported: “Certainly, VP Osinbajo has told the president that he wants to succeed him,” one of our sources said.

“They told him not to allow a third party to tell the president so that the ambition will not be misconstrued,” he said.

The report quoted another source who revealed that Buhari did not express surprise when the vice president broached the topic to him.

“Buhari smiled in his usual characteristic manner…he listened to the VP carefully and while responding, he gave him the green light and wished him well without giving him any commitment or assurance of supporting him ahead of other contenders.

“He blessed the intention just the way he blessed Tinubu when he visited him in the Villa and unveiled his plan to vie for the presidency.

“And I think the president is being careful. Remember what he said while granting an interview to national television,” the report quoted the source.

The vice president has been coy about his ambition even though several support groups have since been openly canvassing for his candidacy.