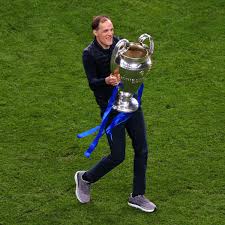 Chelsea have confirmed that manager Thomas Tuchel has signed a new two-year contract with the club.

This comes after the London club revolution since he joined in January following the departure of Frank Lampard.

The German coach managed to reverse the fortune of the club when he came securing a top-four finish for the club and winning the Champions League.

Chelsea confirmed Tuchel signed a new contract on Friday on their website noting that his new contract will have him stay until 2024.

Tuchel said: “I cannot imagine a better occasion for a contract renewal. I am grateful for the experience and very happy to stay part of the Chelsea family.

“There is far more to come and we are looking forward to our next steps with ambition and much anticipation.”

Chelsea director Marina Granovskaia added: “When Thomas joined us in January there was still so much to play for domestically and in Europe. He slotted in seamlessly and immediately became an integral part of the Chelsea family.

“Returning us to the top four in the Premier League was crucial, and we could not be happier with our success in the Champions League which crowned a remarkable season at Chelsea.

“We are obviously extremely pleased therefore to retain Thomas for a further two years, and look forward to more achievements in the coming seasons.”

Olympic Bronze: Read what athlete intend to do to Bishop Oyedepo when she return home