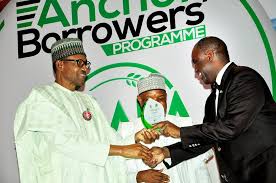 There are indications that Central Bank of Nigeria’s Anchor Borrowers’ Programme is heading for the rocks as bandits are forcing farmers, who took the ABP loans, to abandon their farms.

Farmers in Zamfara, Kebbi, Sokoto, Ekiti and Ebonyi states, in separate interviews with our correspondents on Monday, said repaying the loans would be tough because bandits had taken over their farms and destroyed crops.

Recall that CBN had in 2015 launched the ABP in line with its developmental function. The programme is aimed at creating a linkage between anchor companies involved in processing and small holder farmers of agricultural commodities.

According to CBN, the thrust of ABP is provision of farm inputs in kind and cash to small holder farmers to boost production of the commodities, stabilise inputs supply to agro-processors and address the country’s negative balance of payments on food.

At harvest, farmers supply their produce to agro-processors who pay the cash equivalent to the farmers’ accounts.

CBN Governor, Godwin Emefiele, at the launch of the 2021 wet season input distribution in Southwest in Ado Ekiti last month, said a total of 3,107,890 farmers had been financed for the cultivation of 3,801,397 hectares of land across 21 commodities through 23 participating financial institutions.

He also stated that the sustainability of the programme depended on repayment of loans by farmers.

But farmers, who collected the loans said on Monday that with bandits sending them away from their farms, they would not be able to repay the ABP loans.

I took N1.3m loan, bandits destroyed my farm, I couldn’t harvest even a bag of rice – Zamfara farmer

One of the farmers in Zamfara State, Nuhu Dansadau, in an interview with one of our correspondents, said he collected N1.3m ABP loan.

Dansadau, whose farm is in Yargaladima village in Maru Local Government Area, lamented that he was not able to harvest even a bag of rice because bandits destroyed his crop.

He stated, “Bandits destroyed all my crop very close to harvesting period. They put their cattle in my rice farm and everything was destroyed.”

According to him, the bandits also threatened to kill him if he returned to the farm. He said, “When they destroyed my farm, they also told me not to come to the farm again.”

I was kidnapped for a month, my crop destroyed, I don’t know how to pay CBN loan – Farmer

Another farmer, Umar Yusuf, who took a N600,000 loan, said he was kidnapped by the bandits and detained for over one month.

He maintained that after he paid ransom, he was released and when he returned to his farm, he discovered that the crops he planted had been destroyed by the bandits.

Yusuf stated, “I don’t know how to pay the CBN loan because I didn’t harvest anything.

‘I couldn’t wait to harvest rice and soya beans in my farm at Bardoki village in the Gummi Local Government Area because of persistent bandits’ attacks.”

He stated, “I obtained the CBN loan and I planted rice and soya beans but I was unable to wait for the harvest because of the fear of bandits’ attacks.”

Sarki added that his village was deserted, adding that it would not be easy for farmers to go to their farms.

In Ekiti State, farmers said insecurity had kept many of them away from their farms, making the repayment of the CBN loans difficult.

They lamented the destruction of farms by herdsmen’s cattle among other security challenges.

According to them, the fact that the insurance for the CBN ABP does not cover cattle menace has compounded their problems.

The state Chairman of All Farmers’ Association of Nigeria, Adebola Alagbada, said, “Going to farm is a serious problem. You face the challenge of being kidnapped by bandits.

“Again, the challenges of herdsmen to farmers are enormous. That is why there is no food; no garri, cassava and maize in town. It is a serious challenge and repayment of bank loans becomes a burden to the farmers. Apart from bank loans, farmers get funds from thrift societies, which is more terrible. Farmers are in serious problem now. In my farm, I battle Fulani herdsmen on a daily basis.”

Alagbada, who lamented that that a major obstacle was the limited coverage of the available insurance, said, “We want insurance to cover cattle menace. As it obtains now, it is not packaged into the insurance scheme. The insurance covers just flood and fire. It does not cover herders’ attack which is the problem that we have in the farms.”

Also, the state Chairman of the Maize Growers Processing Marketer Association of Nigeria, John Omoyajowo, whose members lost multi-million naira worth ready-to-harvest maize on over 60 hectares of land to cattle invasion early in the year, said, “We have not been able to get out of it. That is our problem. The farmers cannot go to farm again.

“It would not be easy to pay back the ABP loans. When we were at a meeting in Abuja on Friday, they were clamouring that we should pay back and they were not even advancing us any form of money.

We are being asked to repay, but insurance doesn’t cover cattle menace – Maize farmers

“There is nothing we can do about it. It is unfortunate the insurance we have does not cover cattle menace. When our farms were destroyed, they were referring us to insurance when they knew that cattle menace is not insured in Nigeria.”

Also, the state Chairman of the Rice Farmers Association of Nigeria, Kolawole Rotimi, who lamented that herdsmen attacks had dealt “deadly blows” on farmers and crops production, said, “Up till now, most of the laws that our governors have been trying to put in place, anti-grazing or whatever, have not really been implemented.

“There are still attacks on our farms which have made some people abandon their farms. In some areas, the farmers say they are not going back to the farms. With all these, no insurance. The insurance package that we are using does not cover herdsmen attacks.

‘If we don’t pay ABP loan, CBN will not give us another’

“Farmers are having difficult times to pay back the ABP loan and invariably, if we are not able to pay the loans, CBN will not be happy to give us more. It will affect us too, it may turn to a bad debt. It is a development finance loan and CBN has our reports. We write reports on what we are passing through. I don’t know how the Federal Government is going to assist us,” he said.

In Sokoto State, an elderly farmer, Sani Aliyu, in an interview with our correspondent, said, “More worrisome is that major rice producing local government areas in Sokoto State are under the threat of banditry.

“We cannot go to farm. So, tell me, how can we meet any target? The loss cannot be quantified in that people who were rich rice farmers before are now taking refuge in IDP camps. Some have fled to safe haven in Niger Republic.”

A rice farmer in Kebbi State, Babangida Garba, lamented that the attacks came after floods washed away many rice farms last year in the state.

A 49-year-old Ibiam Uchenna-Ogbuewu, an indigene of Ebunwana Edda community in the Afikpo South Local Government Area of Ebonyi State, said fear of herdsmen attacks had discouraged him from accessing his farms.

“On getting to the farm that morning, I discovered that herdsmen had entered the farm the previous night and their cows had trampled on the rice. For some minutes, I wept and asked them why they did that kind of thing, because they were still on the farm and were very relaxed. One of them said I better shut up or they would beat me up. As I was talking to the other, another one was already bringing out his knife to attack me.”

The Youth Chairman of Afikpo North LGA, Oko Emmanuel, said herders’ attack had hindered him from going to farm.

Emmanuel said the situation had gone very bad and called on the government to expedite action to arrest the ugly trend.

The youth leader said, “It’s a national issue that has assumed a disturbing dimension. I am not a farmer, but my mentor is and I know the level of havoc the herdsmen’s cattle are wreaking on people’s farms. This is what led to the protest embarked upon by the Afikpo women last week. I no longer go to farm.”

CBN declined to comment on the impacts of the growing insecurity in certain parts of the country on their Anchor Borrowers’ Programme.

When asked how the security challenges in these states were affecting the effectiveness of the initiative, a member of CBN Communication’s unit, Isa Abdul, told one of our correspondents that such questions should be directed to security officials in the affected states.

He added that the function of the CBN as regards the programme was to disburse funds to the farmers.

When asked if Federal Ministry of Agriculture and Rural Development would support farmers who could not repay the loans because of bandits’ attacks, Director of Information in the ministry Theodore Ogaziechi, replied in the negative.

He stated that the ministry would perhaps come into the matter if the affected farmer had insurance cover with the Nigeria Agricultural Insurance Corporation.

He said, “Whatever is not budgeted for is absolutely difficult to take care of. This is something different entirely. They went and picked up a loan and are you expecting the agric ministry to come and repay the loans?

“They didn’t take the loans on behalf of the ministry. However, if they were insured with NAIC, perhaps that is when insurance under the Federal Ministry of Agriculture would have taken care of their losses.”

Share
Facebook
Twitter
Pinterest
WhatsApp
Previous articleStandard Bank Group to bring together over 600 delegates in search for Africa’s next phase of growth
Next articleGumi to FG: ‘When you kill bandits’ children, remember they also have our children’

Arguably, the pandemic erased doubts that TV culture is dying. If anything, it showed that TV is not going anywhere. Its mode...
Read more
Article and Opinion

5 traits of a great CEO

While all are important, the one you can't do without is being an A-Team builder Leaders must raise capital...
Read more

A new book from a negotiation expert offers strategies to take the fear out of high-stakes conversations. Over the...
Read more
Load more