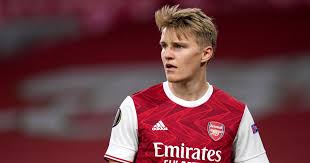 Arsenal playmaker, Martin Odegaard, has said the club wants to win the Champions League “within a couple of years”.

The Gunners have not played in Europe’s biggest club competition since 2017.

This season, they failed to qualify for any European competition entirely.

Odegaard, who has signed a permanent deal with Arsenal this summer, is however confident that they will begin their rise again.

When quizzed on his ambitions, he told Sky Sports :

“I think for this season obviously we want to get back to European football. That will be important for us, the players, the club and the fans.

“Then hopefully with time, win trophies, Champions League and hopefully win the league within a couple of years.”

It was an interesting moment yesterday evening as fans of boxing troop into Teslim Balogun Stadium to see Riliwan Babatunde of Nigeria...
Read more