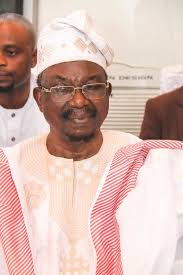 Sen Durojaiye was reportedly dead in the early hours of Tuesday in Lagos while receiving medical attention at age 88.

Durojaiye,was called to the Nigerian Bar in 1979 and was once the chairman, Board of Commissioners for Nigerian Communications Commission (NCC).

He worked for 35 years in the Nigerian public sector, including 28 years as a Director of the Central Bank of Nigeria and the National Mint.

In a condolence message sent to EaglesPath by Barr Adekunle on Tuesday, in Lagos, Adekunle describe the death of the Late Durojaiye as devastating.

According to him , the octogenarian was a father figure who he looks up to as a mentor.

Adekunle said I had my tutelage in his law firm in Ikeja during my law school days between 2010 and 2011. I sucked from his breast of knowledge,. It’s really painful hearing about his death

He also prayed Allah will give his children, family members and the entire Imekoland the fortitude to bear the irreparable loss.

“Late Sen Durojaiye lived a simple but fruitful life. He was a Barrister per excellence, a leader, a God fearing person, and most importantly a man who impacted lives positively.

“On behalf of my family, I sympathize with the Durojaiye family, the entire All Progressives Party Members, especially Ogun State people on the demise of an Icon. I pray God grant him eternal rest.