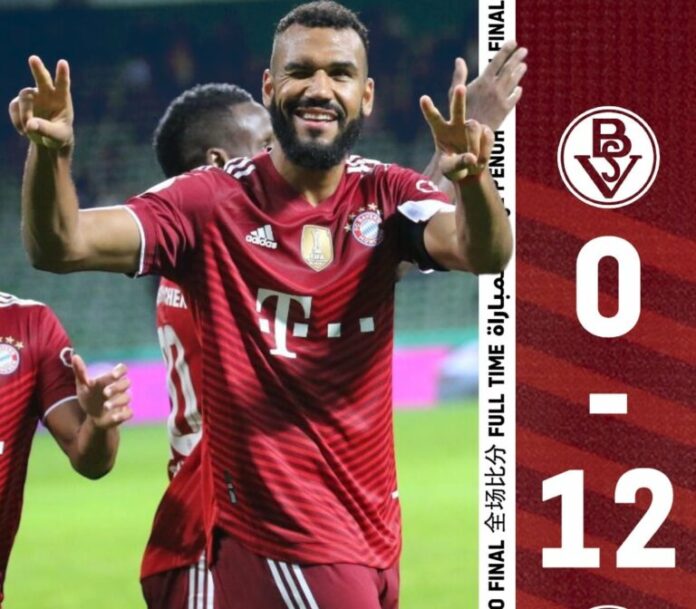 Bayern Munich cruised into the second round of the German Cup on Wednesday with Eric Maxim Choupo-Moting hitting four goals.

The Bremen club’s big day against the record Cup winners was delayed due to a coronavirus outbreak in their squad, but they duly gave their all against their illustrious opponents.

“The way and means was important,” Nagelsmann said. “I think in the first half the structure wasn’t just right, even if it wasn’t dangerous they had some counter-attacks.”

The second period was “better,” felt Nagelsmann and there was particular praise for Choupo-Moting.

He ended the resistance of the Bremen hosts, playing in the stadium of city giants Werder, after just eight minutes.

He contributed a further two goals and was involved in creating Jamel Musiala’s first and an own goal from Jan-Luca Warm all before half-time.

Musiala completed his brace and Leroy Sane, after being booed in the weekend Bundesliga win over Cologne, added the eighth.

Ugo Nobile of the hosts was pointlessly red-carded for a professional foul.

Goalkeeper Ole Bahr —- substituted on for Malte Seemann —- had to pick the ball out in the last 20 minutes courtesy of Michael Cuisance, Choupo-Moting, Bouna Sarr and Corentin Tolisso.

The Bremen side remained positive and attempted to play football when possible.

But it is Bayern Munich —- after warm handshakes all round —- who enter Sunday’s second round draw where tougher challenges await.

“It was a mega experience,” said Bremer SV coach Benjamin Eta. “Even when it was six or seven we kept trying to play, I found that good.

“You could see that we wanted something even if we couldn’t do it.”

Bayern Munich’s win was their second-highest since their 1965 promotion to the Bundesliga, falling short only to the 1997 Cup win over DJK Waldberg 16-1.