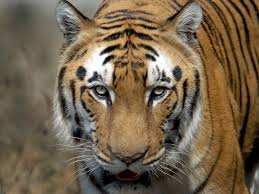 According to EaglesPath Online, an Indian woman is reportedly struggling for her life in the hospital after fending off a tiger to save her child.

Sanjeev Shrivastava, a local official, told AFP News that the mom, known as Archana Choudhary, had brought her child outside late on Sunday night so he could get some fresh air when the animal attacked.

It was discovered that the aforementioned tiger broke out from the adjacent Bandhavgarh Tiger Reserve and broke into Choudhary’s house in Madhya Pradesh, in the state’s center.

The mother was allegedly monitoring her child when a tiger apparently leaped over and attempted to bite into the youngster’s skull, but the mother sprang to the child’s defense.

According to reports, the Tiger persisted in trying to kidnap the boy till the locals heard Choudhary scream and came to her aid.

The tiger then slithered into the forest after spotting the group.

She is now a patient at the medical center. She is no longer in danger and is healing. The infant is doing well, too,” Shrivastava assured reporters.

He clarified that the mother suffered various degrees of damage as a result. She also suffered punctured lungs and wounds to her abdomen while the toddler had deep gashes on his head.

Reports revealed that authorities have launched a search operation to push the tiger back to its territory and that villagers had warned to stay indoors at night.