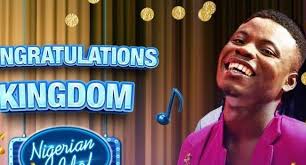 Kingdom Kroseide has emerged the winner of the Nigerian Idol season 6.

This was announced at the Grand Finale which held at the Africa Magic studios on Sunday.

Kingdom has battled with Francis Atela for the most-coveted title of the Nigerian Idol with Kingdom coming out victorious.

He is to go home with a cash prize of N30m, an SUV, as well as other prizes.

During the finale, there was live performance by, patoranking, chike, Ayra starr, and Cobhams.

…As six vocalists battle for a chance to make the last four on The Voice Nigeria Season 3. By Bolaji Israel  Late legendary Nigerian...
Read more
Entertainment

BY ISRAEL BOLAJI Eight contestants survived the heat and are up for viewers’ votes as The Voice Nigeria, Season...
Read more