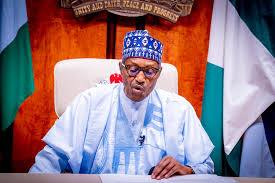 President Muhammadu Buhari and some of his close aides are currently eagerly awaiting results of the Covid-19 tests conducted on them shortly after they returned to Nigeria from London, United Kingdom.

They are, however, currently in isolation according to the protocols for international travellers.

Recall that Buhari travelled to London on July 26 to participate in the Global Education Summit on Financing Global Partnership for Education 2021-2025.

At the end of the summit, the President stayed back in London for a scheduled checkup while some members of his entourage returned to the country.

Buhari only returned to the country on Friday with some close aides who stayed back with him.

Shortly after their return, the President and the close aides took Covid-19 tests.

The anxiety ahead of the result, it was further learnt, was caused by the reported cases of the virus among officials of the Nigerian High Commission in UK while members of the presidential delegation were still in London.

“You also know that when the President visits a country, officials of our High Commission or Embassy, as the case may be, in that country are always on ground to see that the President and members of his team have a successful stay.

“In this regard, it is just natural that those who had interface with officials of the High Commission during their state will be a bit agitated, but it is not really a big deal.

“First set of tests has been conducted and we are waiting for the results. Of course, they will be isolating in accordance with the guidelines released by the PSC (presidential steering committee) for international travellers.”

One of our correspondents further learnt that members of the President’s team who arrived earlier at the end of the education summit also went into isolation, had Covid-19 tests had since been released from isolation.

Recall that the Nigeria High Commission was shut down for 10 days on August 12 following confirmed cases of the virus among officials.

A statement on the matter titled ‘Closure of Nigeria High Commission, London’ had read, “This afternoon, the Head of Immigration Section and two other officials went for a meeting at the Home Office.

“At the entrance, Covid test was administered on them and one of them tested positive to Covid-19. The affected officer immediately isolated while the other officials, who tested negative, will also isolate for the next 10 days.

“In response to this challenge, the mission embarked on testing all officials of the mission, after which another official of the Mission tested positive,

“In line with Covid-19 regulation and the need to adhere to the rules and regulation of the host country, the Mission will close down for the next 10 days, in order to observe the mandatory isolation of those who were in contact with the affected officials.

“While the High Commission regrets any inconvenience that this may have caused, we solicit the cooperation of the general public.”

When contacted on the telephone on Sunday, Senior Special Assistant to the President on Media and Publicity, Garba Shehu, did not speak on the matter, saying he was out of town.

“Sorry. We are presently in Yola on a condolence visit,” Shehu had replied after he had asked that our correspondent send a text message as he was unable to take his call.