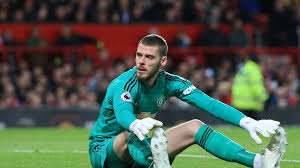 David De Gea has reacted to Manchester United’s decision to bring in another goalkeeper this season.

De Gea seemingly lost his position as the first choice goalkeeper for United last season, with Henderson taking up the role.

However, the Spaniard said he was excited about the arrival of Tom Heaton at Manchester United this summer.

Manchester United have also brought in other new faces such Jadon Sancho and Raphael Varane but De Gea described Heaton as a ‘great bloke’.

Heaton returns from Aston Villa to the club he was signed to from 2002-10 and is not expected to get too many first team appearances.

De Gea and Dean Henderson will sure be ahead of him in the pecking order, but the Spain International said he is delighted to see him arrive back in Manchester.

“[I’m especially excited to welcome] Tom, the keeper, who I’m with a lot of more of the time.

“He’s a great bloke and a top keeper. He’s really going to bring a lot to the group and let’s hope it’s the same with the rest of the signings too.

“They have great quality and I reckon that it’ll be easy for them to settle in.”