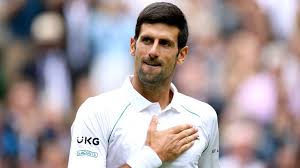 The victory was the Serb’s third consecutive title at Wimbledon.

It also moved him to equal the 20 Grand Slam records of Roger Federer and Rafa Nadal.

It was a feat that nearly did not come to pass.

Djokovic squandered his 5-3 lead in the first set and lost the set in the tie break 7-4, to Berrettini.

The world number one then rallied in the following three sets to overcome the hard hitting Italian, playing his first Grand Slam final.

Djokovic sealed his place in the record books on his third match point when Berrettini’s backhand slice landed in the net.

Having also won the Australian Open and the French Open titles in 2021, Djokovic has now completed the third leg towards achieving the Golden Slam.

No man has ever won the four slams and an Olympic gold in the same year.

DStv and GOtv customers can look forward to the world’s biggest and most diverse celebration of sport, the Summer Olympic Games, which will run from Friday, 23...
Read more
Brands and Marketing

DStv and GOtv viewers can look forward to the world’s biggest and most diverse celebration of sport, the Summer Olympic Games, which...
Read more
Sports

Tokyo Olympics: All athletes will get their rewards even before the end of the games – Sunday Dare

It is five days to the opening ceremony of the long-awaited Tokyo 2020 Olympic Games and everything seems to be going well...
Read more