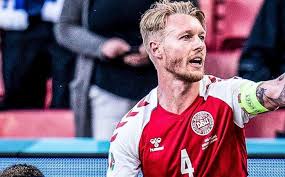 Denmark captain Simon Kjaer said he was disappointed their unforgettable Euro 2020 run came to a halt in the semi-finals following Wednesday’s 2-1 loss to England.

“It’s been a fantastic adventure. I’m sorry that it’s now finished but that’s how it is,” Kjaer told Danish public television station DR1.

“The support we’ve received goes beyond anything we hoped for. I’m proud but I’m also disappointed that we’re not going all the way to the final.”

Denmark took the lead at Wembley through a brilliant free-kick from Mikkel Damsgaard, but Kjaer scored an own goal before Harry Kane hit the winner in extra time.

“We played very well in this match. If we had been a bit sharper at certain points in the first half we could have scored another goal,” said Kjaer.

The loss marked the end of a remarkable tournament for Denmark, who went through the trauma of Christian Eriksen’s cardiac arrest in their opening game.

The Danes lost their first two group matches but bounced back to thrash Russia and make the knockout phase, reigniting their hopes of emulating their surprise Euro 92 triumph.

“I’m at a loss for words,” said midfielder Pierre-Emile Hojbjerg.

“It’s a bit difficult to say what it is. I’m proud of the group and those who took part in this adventure. It was a pleasure.

“It would have been incredible to go further but it’s been a joy to do battle with these people.”