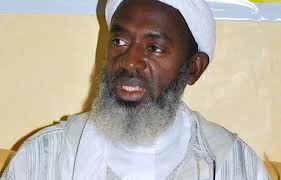 Popular Islamic cleric, Shiekh Ahmed Gumi, has said the Federal Government should calculate all the money it had spent on the Niger Delta region and do same for the Fulani.

He said the country is currently at war which would end when the government creates a Ministry of Nomadic Affairs, as it did with the Ministry of Niger Delta Affairs in 2008.

The cleric said the agitation of the Fulani followed their feeling that they were abandoned while the world progressed.

Gumi spoke yesterday in Abuja at the maiden Interactive Policy Dialogue and Cultural Festival organised by a Fulani socio-cultural association, Miyetti Allah Kautal Hore, with the theme: The Future of Fulani Pastoralists in Nigeria.

He said: “The children that were killing and kidnapping people opened their doors freely to us when we visited them because they heard we were there to preach. All they want is to dialogue. Send them people who they respect to dialogue with them and they will listen. By the grace of God, this problem will be resolved.

“Everyone is to blame for their actions, including the bandits. They feel the world has developed and left them behind, with all the injustice being meted out to them.

“How do we resolve this? We need to walk amongst them, embrace and ensure that all they deserve is given to them. The havoc they are causing is hindering farming; villages have been displaced because they feel that they were also displaced from their homes.

“We are at war and the solution is what was done for the people of the Niger Delta. The government got them justice and even gave them a ministry. Why can’t the government give us a Ministry of Nomadic Affairs? Education should be inclusive with empowerment and hospitals.

“They still have respect and behave like everyone else when you meet with them. We need to come together – politicians, security agencies, traditional and religious leaders – and assist them. They are acting out because they have been pushed to the wall. Since the inception of Nigeria as a country, they have never got real assistance.

“I am calling on the President. Before you leave office, hand over the money; meet their leaders to get to them. About 99.9 per cent of the Fulani are peace-loving; only about 0.1 cent are causing all the havoc, which is not being caused for mere mischief but because they have been pushed to the wall.

“We have to engage these people to have a positive result. My only fear is the infiltration of terrorists into their midst. It’s a factor we have to consider seriously, and even the terrorists themselves.

“I think there is neglect. Until now, Boko Haram was not a hopeless case. So, we have to protect our herdsmen from their infiltration.

“There is a treaty we have with all non-Muslims in Nigeria to live together in peace, which was reached with the colonial masters. This is renewed every time we elect members of the House of Assembly.

Proffering solution to the situation, Chairman of Progressive Governors’ Forum (PGF) and Kebbi State Governor Atiku Bagudu said the security challenges being faced across the country required international support to surmount and the affected states to overcome.

The governor, whose state is affected by the activities of the armed bandits, said states lack the resource to solve the problem on their own.

He said: “We need to put pressure on the leadership to put more resources to solving the problem. Our resource is lean, hence the need for international and regional support for solution.”

A lecturer in the Department of Sociology at the University of Abuja, Prof. Umar Kari, said his interactions with the bandits showed that they love and respect clerics.

He said: “When we went to (suspected bandits’ leader) Bello Turji’s camp, which is called Yansha Bukwai, surrounded by battalion-sized child soldiers, 13 to 14-year-old kids were smoking marijuana. But the moment we started reciting the Qur’an, I saw the kids dropping the marijuana and snuffing it out, with some touching others to do same.

“They wanted to know who the Sheik was. One of them even gave me N500 at the end to give to the sheik. These are people killing and kidnapping everyone. There is something in their hearts touching them – the Qur’an – and they have love and respect for clerics.

“Turji waited for us for two hours. He said he waited because he heard that a cleric was coming; so also our meetings with commanders in Niger. You can see the respect they have for clerics.

“The clerics and traditional rulers are the ways to get to these kids, not soldiers. We must realise where we went wrong.”