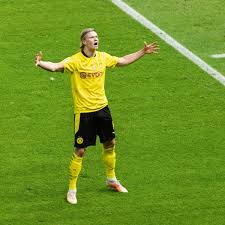 Real Madrid seem to be turning their attention away from Paris Saint-Germain forward Kylian Mbappe and towards Borussia Dortmund striker Erling Haaland, as they have reportedly already been given the green light from the Norway international for the move to happen.

There is still the issue of Los Blancos needing to agree a fee with the German club, so it will be a case of whether Dortmund want to receive a higher fee this summer of risk losing him for 75 million euros in 2022, as Haaland has a release clause that becomes activated from next summer.

According to the Italian newspaper La Repubblica, Real Madrid have already had an offer of 110 million euros turned down by Dortmund for Haaland, with the striker’s current club valuing him at a figure closer to 150 million euros – double what they could fetch in 2022.

It is thought that an agreement could be reached for a fee in the region of 130 million euros, as Real Madrid president Florentino Perez looks to bring in a Galactico signing to bring hope and enthusiasm back to Los Blancos’ supporters after a season in which the club failed to lift any silverware.

Haaland gives the green light
Haaland himself has given the OK for the deal to happen, as is the case with his agent, Mino Raiola. A few months ago, Raiola and Haaland’s father made a trip to Spain as they first visited Barcelona’s training facilities before heading to Valdebebas.

The 20-year-old, who has a contract at Dortmund until 2024, scored 41 times in 41 appearances last season, while he also turned provider on 12 occasions. He did not shrink on the big occasion too, as 10 of those goals and two assists came in eight Champions League games – Real Madrid’s favourite competition.

There has been talk that, if Dortmund do lose Haaland, they may look to bring Real Sociedad striker Alex Isak back to the club.