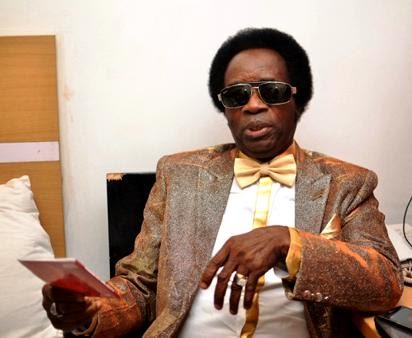 One of Nigeria’s music legends and highlife maestro, Victor Uwaifo, is dead. He was 80 years.

One of his children, Uwaifo Peter de Rock, broke the news of the demise of the Professor of Visual Arts, University of Benin, on his Facebook page, yesterday evening.

Peter who did not disclose the cause of death of his father, however, expressed anguish at the passing of the music star.

“Daddy why did you leave us now? Prof Sir Victor Uwaifo has gone to rest. Black Saturday for me now”, Peter wrote with 34 sad Emojis arranged in pair of 17 lines.

“One week now after collaborating with me”, the distraught younger Uwaifo added.

Some of Uwaifo’s albums ‘Joromi’ and ‘Mammy Water’ released in the early 60s, were instant hits and have remained evergreen.

The legendary musicologist served as Commissioner for Arts and Culture in the administration of Lucky Igbinedion in Edo State.

A First Class graduate of Visual Arts, UNIBEN, his undergraduate project of a king on a horse, is a signature arts poster at the Ekenwan Campus of the university.

Uwaifo played the guitar with dexterity and displayed kinetic dancing steps in his heydays.

Ripper, an Australian musk duck, has mastered the art of mimicry and can even swear at you. You have to hear it...
Read more
Entertainment

The Association of Advertising Agencies of Nigeria (AAAN) has concluded arrangements to hold the 16th edition of the Lagos Advertising and Ideas...
Read more