Igbokwe gives reasons why Osinbajo should step down for Tinubu 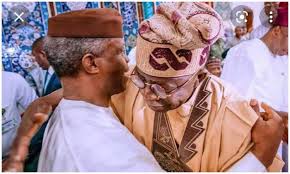 Igbokwe on his Facebook page said such presidential aspirants should step down for history and posterity’s sake.

On Monday, Osinbajo joined in the race of those vying for the exalted position in 2023

It was alleged that Tinubu had stepped down for Osinbajo to be Buhari’s running mate because both Buhari and Tinubu are Muslims and it was nearly impossible to sell a joint Muslim-Muslim presidential ticket in 2015.

Osinbajo had served under Tinubu as attorney-general of Lagos State for eight years.

Reacting to Osinbajo’s declaration, Igbokwe who is the Special Adviser on Drainage and Water Resources to Governor Babajide Sanwo- Olu of Lagos State, on Monday said,”Let me drop it here for history and posterity:

”If you are one of the people Asiwaju raised up and you are eyeing the presidency of the Federal Republic of Nigeria, show respect and withdraw from the race.”

According to Igbokwe, Bola Tinubu has political structures that can win a presidential election, although every eligible Nigerian including Vice-President Yemi Osinbajo (SAN) has the constitutional right to vote and aspire for any office in the land.

Igbokwe stated this in a chat on Monday, shortly after Osinbajo declared to run for president in 2023, ending years of conjecture about his political future.

The APC chieftain said, “If you want to win an election in Nigeria, you have to have structures, deep structures across the country that you have built for over 20 years. That is what you need to win the presidency of the Federal Republic of Nigeria.

“Tinubu has a structure, just like (MKO) Abiola did in 1993; Abiola had a history before 1993. Asiwaju (Tinubu) also has a history but let’s wait and see.

“The structures on ground will be the determining factor. We want Asiwaju,” he said.