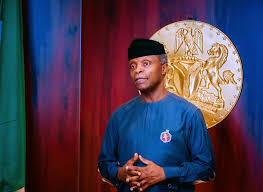 The Vice-President of Nigeria, Prof. Yemi Osinbajo, has called for the assistance of orphans across the country, saying there is a need to serve humanity.

Osinbajo noted that being an orphan does not determine the greatness of a child’s future. He said many great men in Nigeria and the world are orphans, hence the need to help children in the orphanage.

The VP stated this at the inauguration of a charity and social development centre, called Dorian Home in Akure, the Ondo State capital, on Thursday. The centre was built by a philanthropist, Dr Tolulola Bayode.

According to him, the number of widows and orphans in Nigeria has increased due to insecurity issues such as violence and clashes in many parts of the country.

Osinbajo said, “We are confronted with a huge challenge. In 2015, the Federal Ministry of Women Affairs and Social Development estimated that there were about 17.5 million orphans and vulnerable children in a nation of about 200 million people. That is close to nine per cent of the population. Sadly, this number has increased over the years due to violence, conflicts, communal clashes in different parts of the country.

“There is a large number of widows and vulnerable women and again due to conflicts in different parts of the country, the number has grown. Millions of orphaned children need spaces to grow and to thrive and ensure that their physiological needs are met, a place where they are cared for and trained. The women after harrowing situations also need spaces where they can begin to rebuild; that is why places like Dorian Home initiatives are needed.”

In his remarks, the Ondo State Governor, Mr Rotimi Akeredolu, said the newly inaugurated humanitarian project would complement the good agenda of his administration.

Represented by his deputy, Mr Lucky Aiyedatiwa, the governor said, the Dorian Home “would have the total support the Ondo State Government.”

The founder of the humanitarian centre, Dr Tolulola Bayode, explained that the state-of-the-art building would accommodate motherless babies, games, a dining hall, a decent kitchen, women training hall among other features to devel