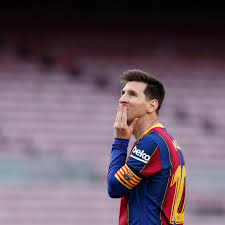 Lionel Messi is expected to make his Paris Saint-Germain debut in the Ligue 1 clash away to Reims on August 29.

Messi trained for only the third time on Monday following his historic switch from Barcelona and is in the process of reaching head coach Mauricio Pochettino’s high standards of fitness.

But according to former Arsenal and French top striker Thiery Henry, PSG may have added ‘superhuman’ Messi to their squad, it is not enough if they want to challenge for trophies this season.

Henry insisted Mauricio Pochettino’s side need to improve defensively to win trophies on both domestic and European fronts.

“Balance is the most important. At one point, we always talk about great players, attacking, going forward, but we need a balance,’ the former France forward told Dimanche Soir Foot on Amazon Prime.

“We are talking about the team in which I played at Barca, but people forget to point out that we weren’t conceding a lot of goals.

“When you have superhuman players, it gets a little easier but when I see how Paris is evolving at the moment, they concede too many goals for my taste to be able to go a little further. It is true that there was a lack of players but the balance is the most important.”