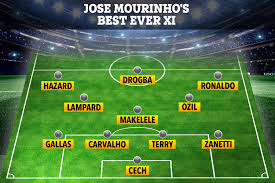 Former FC Porto, Chelsea, Inter Milan, Real Madrid and Manchester United boss, Jose Mourinho has named the best first eleven from the clubs he has coached in the past.

The Portuguese has managed some of the world’s best players in recent years, with former Super Eagles captain, John Obi Mikel forming an integral part of the Portuguese team at Chelsea.

Apart from Obi Mikel, Michael Essien Ballack, among other top stars he has managed, Mourinho also made some difficult decisions in leaving out the likes of Iker Casillas, Marcelo, Karim Benzema, Zlatan Ibrahimovic, Samuel Eto’o, Wesley Sneijder and Romelu Lukaku.

The above list contains as many as eight of the XI who played for Mourinho at Chelsea.