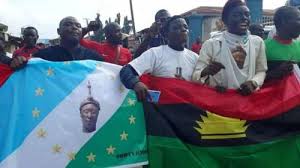 Northern mouthpiece, Arewa Consultative Forum (ACF), yesterday, said it would not ask for a separate country out of Nigeria like the Igbo and Yoruba are doing with agitation for Biafra and Oduduwa Republic.

ACF also said it would not be part of agitation for the break-up of the country as canvassed by Indigenous People of Biafra (IPOB) and some Yoruba youths, led by Sunday Igboho.

However, the forum tasked northerners to unite and fight against activities of kidnappers, bandits and other criminal elements in the region.

In their separate remarks at the National Executive Council (NEC) meeting of the forum, Chairman and Secretary General, Audu Ogbeh and Murtala Aliyu, said insecurity has become unbearable in the North and it should be tackled headlong.

Earlier, Ogbeh said: “At this time, other than before that the North is facing security challenges, we have to come together and solve our problems. Don’t lose faith, we shall overcome the challenges.

“What we want is peace, and an end to banditry and criminality. All we want is an improvement in the economy of our country for the betterment in the lives of our people generally, especially the North.”

“We are going to work for a united Nigeria and that is what we stand for.

“They have raised the issues of resource control, division of the country and so on. The rapid response committee of ACF is to respond to issues affecting the Arewa.”

Meanwhile, ACF told Igbo elders that they should not panic over the safety of their kinsmen residing in the North, saying Igbo in northern Nigeria are even safer than northerners themselves.

The Forum said it would meet with leaders of Ohanaeze Ndi Igbo, Afenifere and South South leaders to discuss the lingering issues that have tended to pit ethnic and regional groups against each other.

In the face of lingering accusations and counter-accusations over tensions generated across the country over call for nation’s break-up by sections of the country, Igbo elders had, penultimate week, appealed to northern leaders to ensure their kinsmen are safe in their domains.

A communique read by Ogbeh at the end of its NEC meeting, called on Igbo leaders to protect ordinary northerners in their domains, pointing out that report of daily killing of northerners who are into menial jobs in the East was appalling, and not acceptable.