Opinion: Such a Dangerous time to be a Student 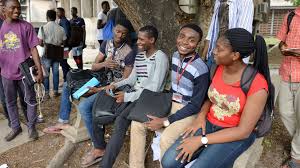 Growing up in this country some years ago was full of fun and pleasant memories; from your classmates, to your teachers, the school authority, and everyone around. It was a grand community wherein all the misdemeanor of children were corrected by neighbours and children still plead not to be reported to their immediate parent; parenting was done by the community.

Reading newspaper reports daily has negatively impacted the mental health of many persons. Howbeit, would one remain perpetually deaf to what is happening in one’s community? Life has got so bad that being a student has become a difficult journey to embark upon.

The happenings in the North-Eastern part of Nigeria have made schooling very dangerous. Well, as said, that is the meaning of Boko Haram from the beginning is Western Education is forbidden and it is depicted with the various killings and abductions. In the last few years, students in that region of the country have been turned into refugees in their homeland. Although, recently, the Borno State Government is making attempts at resettling the Internally Displaced Persons (IDPs), and schools are being built and commissioned all over. This signifies the beginning of Western Education for this set of Nigerians.

Imagine the recent happening in Greenfield University, Kaduna State. Some students were killed for no just cause. The situation is critically alarming that lecturers, workers, and students have become targets of kidnappers. About the same time, a Professor of the University of Jos, Grace Ayanbimpe and her husband were also kidnapped. All of these led the Senior Staff Union of Universities to demand weapons to guard themselves if they cannot be safe on their various campuses.

It is such a challenging time to be a student when you think about the number of auto crashes that claim the lives of students annually while trying to commute to their various institutions of learning and back to their homes. This also brings to the fore the unfortunate death of the students of the Adekunle Ajasin University, Akungba-Akoko, earlier in the year, who were crushed to death by a truck.

When you encounter Nigerian students, you need to pity them specially. They would spend years in a tertiary institution of learning, either state or federal, because the Academic Staff Union of Universities and the Nigerian Government are always at loggerheads over things they usually claim would benefit the students. It is so saddening that you can only know the year in which you resume school but you can never know the year in which you will graduate. Every day, the heartbeat of parents and the students keeps palpitating strongly because nobody knows what would be the next occurrence that would make interrupt learning.

Despite all these, female students are exposed to several ills within few years of maturity. They are trailed by lecturers old enough to be their fathers; some evil students rape and murder them amongst others. The journey of a female student needs special care with all that is heard and seen these days. Kudos to the University of Lagos for firing two randy lecturers.

At the moment, Nigeria is just heading for a more grievous crisis in terms of labour force. As stated by Professor Olayinka Idowu, the former Vice-Chancellor of the University of Ibadan. Every Senator wants a University to be sited in his hometown, as such, quality education is fast depreciating in Nigeria. Asides that, all the Polytechnics are being converted to Universities, for instance, Yaba College of Technology and the Federal Polytechnic, Ilaro. These schools may become Universities but what of the technical know-how that we are losing. The skillset of a graduate of the Polytechnic is very different from that of a University graduate. Although the Senate has removed the dichotomy lately, we still need everyone to understand the differences, if not, polytechnics would becoming ghost tertiary institutions.

Ultimately, if you are fortunate to get through school without any scar or blemish; the hurdle of serving your fatherland is staring at you in the face. With all the various uprisings in the country, where is the safe haven for a one-year period, that reminds me, the NYSC Orientation Camp in Maiduguri, has been turned into an IDP camp. Where exactly is the place that one would want to serve with the current state of the country? If you are not thinking of all these, it becomes frightening for the Director-General of NYSC saying that Corps Members can be deployed to a war zone if a war breaks out. Can a Corps member defend the integrity of this nation by mere marching when trained soldiers are being killed by terrorists in our nation?

Have you noted the rising spate of the kidnapping of those in search of work lately? The syndicate is getting more organized daily. They would lure victims to a particular location, thereafter abducting such individuals. It is getting sophisticated to a fault. There jokes about the situation about how lucrative the kidnapping business has become. People now notify others to look out for certain addresses as they are the hideout of people perpetrating such heinous crimes.

Olutayo Irantiola is a Public Relations Consultant and Creative Writer based in Lagos, Nigeria, his writings are available on www.peodavies.com