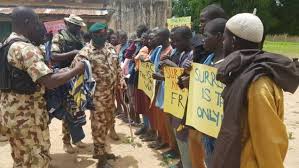 Nigerian Army says at least 1,000 Boko Haram/Islamic State West Africa Province (ISWAP) members have laid down their arms and surrendered to its troops.

Army spokesperson, Onyema Nwachukwu, stated this on Tuesday in a statement in Abuja.

He debunked reports that the force was making arrangements to free two senior repentant terrorists.

The army’s response comes amidst reports that the terrorists have been surrendering and embracing peace.

It has on at least four different occasions in the recent past said that several terrorists had repented.

In Tuesday’s statement, the army stated that it would continue to operate according to the Nigerian constitution.

The statement also said all the surrendered terrorists would be received, processed and passed on to the relevant agencies of government for further assessment in line with extant provisions.