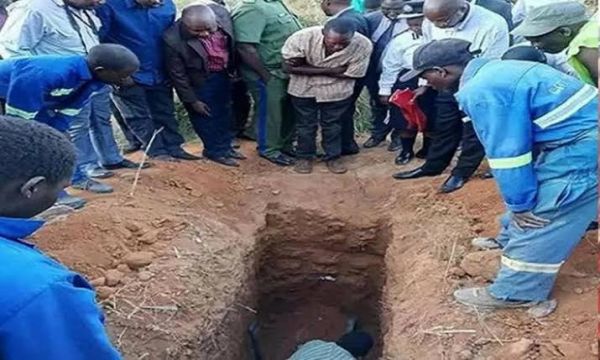 James Sakara, the pastor of a Zambian Christian church, was found dead after asking to be buried alive in the ground so he could come back to life in three days’ time, like Jesus…

To say that 22-year-old James Sakara was overconfident in his ability to emulate the resurrection of Jesus Christ would be an understatement. Be that as it may, the pastor of the Zion Church in the Zambian town of Chidiza managed to convince his congregation that he could in fact come back to life after three days, just like the Son of God. He somehow got three members of his Church to assist him by digging a shallow grave, tying up his hands, and burying him alive, only instead of coming back to life after three days, Sakara was found dead by members of the Zion Church curious to see why their leader hadn’t fulfilled his promise.

Upon seeing their leader’s lifeless body, some members of the church attempted a series of “spiritual exercises” in order to resurrect him, but to no avail.

Trying to explain his decision to his flock, the young pastor, who was also a practitioner of traditional medicine, quoted scripture, saying that on the eve of his murder by Roman soldiers, Jesus’ words to his disciples – ‘do this in memory of me’ – referred to resurrection and not just imbibing wine and crunching unleavened bread.

As you can imagine, most members of Sakara’s congregation were reluctant to let him go through with his foolish stunt, let alone aide him, but eventually, three men came forward to assist the pastor with the burial. One of them came forward, and two are currently wanted by police.

Bombastic stunts by dubious religious leaders are not unheard of in Africa. In years past, we wrote about pastors who claimed to have God’s phone number, or that could heal people by spraying bug spray in their face, and there was even one who staged elaborate resurrectionsthat turned out to be fake. But unlike these frauds, James Sakara was a victim of his misguided faith, and that sadly cost him his life. He left behind a young pregnant wife and many confused parishioners.

Some hours ago, the federal government named some universities and declared them as Illegal through the National Universities Commission.
Read more
Foreign