PDP Furious Over Attack On Ladi Adebutu, Others By Gov Abiodun Appointees 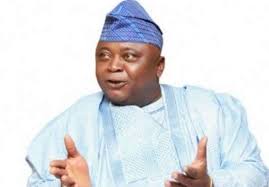 The Ogun state chapter of the Peoples Democratic Party, PDP has condemned the friday attack on a former lawmaker, Hon. Oladipupo Adebutu and other members of their party by a gang allegedly led by Governor Dapo Abiodun’s special adviser on political affairs, Adebiyi Adeleye and the transition commitee secretary in Remo North local government, Muyiwa Sodade.

According to the state Publicity Secretary, Asiwaju Bankole Akinloye said the needless attack occured on friday May 28, 2021 at Isara Remo when their party leaders and several members were departing from a social function in the town.

He said, “the attack was led and coordinated by an undesirable individual named Muyiwa Sodade on the order of one Adebiyi Adeleye, a political appointee under Governor Abiodun’s government. The said Sodade who was armed with a pistol, in company of his gang with several dangerous weapons was shooting in to the air as they waylaid our members’ motorcade with the view to wrecking serious havoc.”

The PDP confirmed that few vehicles were damaged and the incident has been officially reported at Isara Police Station and at the Area Commander’s Office, Iperu for further actions.

Bankole stressed that PDP as a responsible political party that has a rich tradition of peaceful and civil conduct, they demand immediate arrest of Muyiwa Sodade and others who were allegedly involved in the attack. “They must be made to face the full weight of the laws. This demand becomes very necessary so that they would serve as deterrents to others who take mindless delight in disturbing public peace and tranquility.”