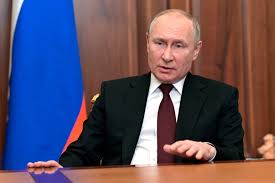 Russian President Vladimir Putin appeared at a massive rally in Moscow Friday, applauding his troops as they continued pounding Ukrainian cities with shelling and missiles.

“We know what we need to do, how to do it and at what cost. And we will absolutely accomplish all of our plans,” Putin, wearing a white turtleneck and a blue jacket, told the crowd gathered in and around Luzhniki Stadium. Approximately 200,000 people were in attendance, many waiving Russian flags, according to Russian police and state-run media.

Putin praised his soldiers at the celebration to mark the eighth anniversary of Russia’s seizure of the Crimean Peninsula from Ukraine in 2014. “Shoulder to shoulder, they help each other, support each other and when needed they shield each other from bullets with their bodies like brothers. Such unity we have not had for a long time,” he said during the five-minute speech.

He called the Feb. 24 invasion necessary to defend against the “genocide” of Russian-speaking people in Ukraine – a claim flatly rejected by the West.

State television, which featured his speech, briefly cut out due to a technical glitch, according to Kremlin spokesman Dmitry Peskov.

Putin quoted Russia’s 18th-century naval commander, Fyodor Ushakov, to indicate that Russia would prevail in Ukraine. “He once said that these thunderstorms will go to the glory of Russia,” the president said. “That is the way it was then, that is the way it is now and it will always be that way.”

The event was held inside a soccer stadium that was used in the 2018 Soccer World Cup. The slogan “For a world without Nazism” appeared on the stage where Putin spoke.

Before Putin addressed the crowd, speakers praised him for fighting “Nazism” in Ukraine – an assertion rejected as false by many world leaders. Ukraine President Volodymyr Zelenskyy is Jewish. Zelenskyy has noted previously that members of his family were killed in the Holocaust.

Russian singer Oleg Gazmanov stirred up the audience with a rendition of “Made in the U.S.S.R.” with the opening line “Ukraine and Crimea, Belarus and Moldova, It’s all my country.”

The U.N. estimates that nearly 3.3 million people have fled Ukraine since the fighting began. The agency has confirmed a total of 816 civilians killed and 1,333 injured – numbers that it says are significantly below the actual figures. The World Health Organization has recorded 43 attacks on hospitals and health facilities, with 12 people killed and 34 injured.