Stealing Pot Of Soup On The Rise In Enugu 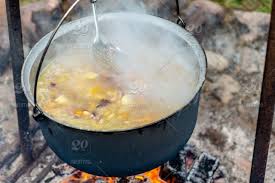 Pathetic story about how right now in some part of Enugu, Enugu State have become risky to leave a pot of soup on fire because it is most likely to be stolen by hungry thieves, no matter how hot it’s, EaglesPath Online reports.

The hungry thieves wouldn’t even spare pots of rice, beans among others if left unwatched by the owner.

investigations further revealed that the robbers stole a pot of soup that was still on fire from the owner at Obiagu in Ogui New Layout recently when the owner went inside the house to pick something.

“My brother, my name is Mrs Ijeomah. We are residing at Ama Awusa in Obiagu. I was cooking a pot of soup that my children and I will eat in the evening. The soup was almost done but I felt the salt was not enough so I decided to get more salt from the house.

“Immediately I went inside the house, I heard a noise and I did not believe that somebody would even think of stealing my pot of soup. The place we are residing is not fenced so it is porous. When I went out, I was surprised to notice that my pot of soup on fire was no more.

“I felt bad about it because my children were waiting for the soup to be done so that they could eat but unfortunately we lost the whole pot of soup to a greedy robber. If the person had told me, I would have given some portions of the soup to him to eat.

Because of that, my children went to bed hungry,” she lamented.

Another victim, who spoke to our correspondent on condition of anonymity, said the same group of thieves stole her pot of soup while it was boiling.

“The level of poverty is alarming. How can somebody come to my house and carry my pot of soup while on fire. This is not a good development at all. I heard that they have been doing this kind of thing for sometime now. I don’t go out again whenever I’m cooking until I get the pot down,” she stated.

It was gathered that apart from stealing of soups, some people are now breaking into foodstuff shops to steal food items in some areas in the state.