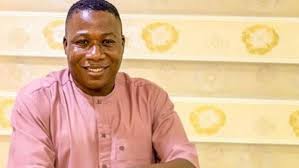 Yoruba nation agitator, Chief Sunday Adeyemo, a.k.a Igboho Oosa yesterday dared the Attorney-General of the Federation and Minister of Justice, Mr Abubakar Malami to mention the name of the federal lawmaker that he alleged was his major financier.

Igboho said he was a businessman and not a terrorist as alleged by the Chief Law Officer.

Igboho, who is being detained in the Republic of Benin after he was arrested on his way to Germany was responding to Malami’s statement yesterday that a federal lawmaker in the National Assembly has been identified as a major financier of Igboho’s alleged terrorist acts and that the Yoruba nation activist was operating 43 bank accounts.

The Attorney-General who made the disclosure while briefing newsmen, however declined to reveal the identity of the said lawmaker saying the information would be made public at the appropriate time.