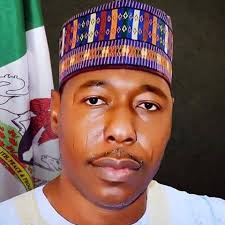 Zulum said over 100,000 people have been killed in the 12-year insurgency in the North East.

He also said the whereabouts of about 10 per cent Borno indigenes were not known as a result of insecurity in the state.

He said 2,600 insurgents were in custody of the state, but not all of them that have surrendered were criminals.

Zulum made the disclosure while briefing journalists after a meeting with President Muhammadu Buhari in Abuja, yesterday.

The governor said not all those surrending were criminals as most of them awere women and young children who were conscripted and trained to handle AK-47 by the insurgents.

He said no law prescribes the killing of surrendered insurgents, saying they would be trained for the purpose of reintegration into the society.

“But mind you, among those that have surrendered, some are innocent, that were forcefully conscripted into this programme. Some are teenagers, below the ages of 11, 12, who can handle AK-47 and there’s one very important thing that Nigerians need to understand; if this issue of Boko Haram, insurgency, is not resolved, I believe it will never end because it is a generation. Those that came out from the bush you can see one person has two wives, three wives in the bush, he’s having 10 children. These children are well trained to behave in such manner.”

Zulum, who said he had been attacked by insurgents about 50 times, also promised to support victims of insurgency, especially those whose parents were killed.

He expressed support for ongoing surrendering by insurgents, saying it was in the best interest of peace and a way to eventually bring the protracted insurgency to an end.

“In the last 12 years thousands of lives were lost, people have completely lost their means of livelihood. We have a total number of over 50,000 orphans and widows, these are official figures, the unofficial figures are more than this, and we were able to cultivate not more than three percent of our total arable land because of the insurgency and right now, the whereabouts of not less than 10 per cent of people of Borno State is not known to all of us at all. This is a very serious matter and I think the report of the surrendering of the insurgents, to me in particular and to the greater people of Borno State, is a very welcomed development. Unless we want to continue with an endless war, I see no reason why we shall reject those that are willing to surrender.”