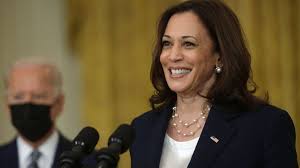 Many leaders are also strong public speakers, and that shouldn’t be surprising. To be successful, leaders need to be able to convey ideas clearly and confidently. But one leader—Vice President Kamala Harris—has taken on the additional role as a public speaking coachon more than one occasion, offering precise and consistent advice to very different constituents.

Here are two of the most publicized moments:

In April 2021, during the veep’s visit to the New Hampshire Electric Cooperative, technician Jeff Bird was supposed to deliver a short speech to her in front of news media. But moments after Bird started, he stopped short, flustered and lost in his words, even though he had his entire speech written on cards in his hands.

Bird eventually completed his speech and thanked her.

Two years earlier, Harris offered very similar advice to a group of young women during a campaign stop in New Hampshire when one asked how she got so comfortable speaking in public.

Her advice boils down to this: Realize that, first, you know something your audience doesn’t know but needs to know; and second, it’s your job to share it with them.

As a public speaking coach for more than 15 years, I consider this very practical and effective advice for all speakers, as it was for both the adult professional and the young schoolgirl; and here’s why:

It’s Not About You

When you give a speech, the occasion isn’t a test of your personality, your appearance, or even your ability. In most settings, giving a speech is not about you at all. It’s about your point—and moving that point effectively from your head to your audience’s heads.

Knowing this should make speakers feel less nervous and judged, as the focus shifts from person to purpose. The goal is not to be perfect or even to perform; the goal is simply to present.

It’s About What They Need to Know

Too many speakers start with the question, “What do I want to say?” This is the wrong question because it doesn’t begin to consider the true goal of public speaking: not just speaking aloud, but impacting an audience. To engage and inspire an audience, the right question is, “What do they want and need to know?”

Once you identify and connect what your audience needs to hear (“what they don’t know”) with the unique knowledge or insight you have (“what you know”), your speech basically writes itself.

Whether you’re a business leader, public official, intern, or student, the keys to confident and competent public speaking are just as Vice President Harris laid them out: “Teach them what you know because they don’t know, and they need to understand it.”

Giving yourself that sense of purpose will reinforce your point and reduce your panic, and if it works for the vice president of the United States, it can probably work for you too.