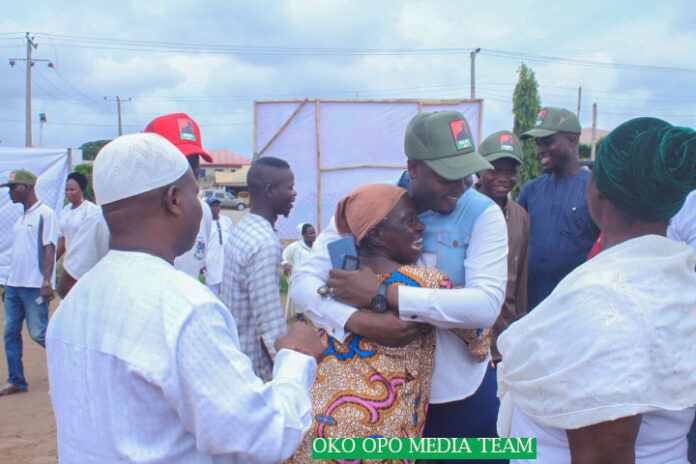 Every last Monday of the month is always a time to give back to the society, a program designed by a legal firm , Adekunle Adegunle and co as Corporate Social Responsibility to reach out to members of the society through feeding program.

On Monday as almost Thousand troops to the office of Barrister Adekunle Adegunle popularly known as “OKO OPO”, there were insinuations that some top leaders of the APC in Alimosho told party members to stop coming to Adekunle’s office, stating odd reason.

A woman leader of the APC who spoke to EaglesPath on condition of anonymity said “We use to go to our leader house , and they do give us just a token that can hardly take us back home as transport, but they asked us to stop coming to this program because our Adekunle (Our Husband) declares interest to contest for the House of representatives seat”. She however opined that it’s unfortunate that these leaders who subject them to inhumane treatment before giving them a token will ask them to stop coming for the Free Food For All program that has been existing since the beginning of this year and also plant people to monitor their presence.

Mr Aderopo a card carrying member of the PDP said it’s unfortunate that we’ve people at the helm of affairs who politicize everything, this young man has been giving us food irrespective of party affiliation, religion or tribe, he also reaches out to widows annually and empower them, I was surprised when my neighbor came back one day and started talking about her APC leaders who asked them to stop coming here, but I’m so glad that they didn’t hearken to them, because I can still see my neighbor and friends here. It’s devilish to think that what you can’t give, you should stop others from giving, even though you’re in a better position to do more than the giver, he concluded

Mrs Shola on her own said, I’ve known Barrister since he was young, and he didn’t start giving out to people today, I’ve been enjoying his helping hand since he was a student, our party leaders don’t want anybody to progress without their input. If you look at him, he’s a young man, and he’s doing well and doesn’t need anyone’s blessings, I think that’s their problem.

A representative of the Deaf who pleaded not to be mentioned wrote on a piece of paper when asked if there was a threat to them, he said they were reprimanded for coming to August Edition of the program, they said why are we following OKO OPO, yet they haven’t given us a penny in their life nor provide us anything. He continued “OKO OPO” gives us food monthly, he reaches out to our personal needs, he recently asked how he can empower us when he realized some of us have no Job.

EaglesPath Online reports that ver 40 bandits have been gunned down in the North West, according to the military authorities.
Read more
Load more