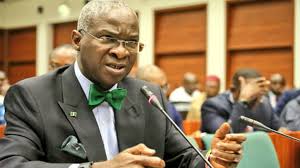 The Minister of Works and Housing, Babatunde Fashola, says politicians campaign with road projects because of their economic impact on society according to EaglesPath Online.

He said this at the 27th meeting of the National Council on Works and Housing held in Bauchi on Thursday.

Fashola, the minister of works explained that since the implementation of the Marshall plan in 1948, after the Second World War, it has become clear to any serious-minded economist or politician that infrastructure provision is critical to development, growth, wealth creation, employment and prosperity.

According to him, investment in infrastructure is the most legitimate way to distribute wealth in any economy.

Fashola said, “This is why it is not surprising that during campaigns for elections and after elections, you will find discussions not only centering around roads, bridges, rails, schools, hospitals, water supply and power supply to be provided, you will also find that in the inauguration speech of every President, Prime Minister, Governor and other elected public officers, time is dedicated to addressing the provision of infrastructure.

“The reason for this is not far-fetched. The nations that are richer than us have more infrastructure than us and in order to bridge this gap, we have to invest; because no nation or community can grow bigger than the stock of infrastructure.

“Infrastructure also helps to make people efficient, it creates competition and leads to productivity. Currently, the Federal Government is executing 895 contracts in 795 projects spanning over 13,000 km of roads and bridges nationwide.

“Across all of these, engineers, geologists, surveyors, lawyers, bankers, suppliers, artisans and laborers are involved in an ecosystem of enterprise from which they earn a daily, weekly or other periodic income.

“But that is only part of the story, the employment. The other parts include improved asset value, because everywhere a new road or bridge is built, the land value appreciates by up to 30 per cent creating enormous capital gain