Home Foreign "Without the Communist Party, There Would Be No New China”, Song as...
Foreign

“Without the Communist Party, There Would Be No New China”, Song as China Celebrate 100years 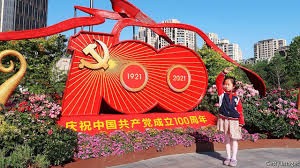 Celebrations in Beijing to mark the 100th anniversary of the founding of China’s ruling Communist Party kicked off on Thursday morning with a flyby of fighter jets and helicopters at Tiananmen Square in the centre of the capital.

Around 30 aircraft formed a “100” as crowds cheered under the gaze of the nation’s leaders, including President Xi Jinping, seated at the southern ramparts of the Forbidden City.

Xi, China’s most powerful leader since Mao Zedong, is scheduled to deliver what state media have described as an “important” speech at the iconic Tiananmen Square, where there has been heavy security.

Xi and the party are riding high as China recovers briskly from the Covid-19 outbreak and takes a more assertive stand on the global stage, although Beijing also faces criticism over its actions in Hong Kong and Xinjiang, and contends with a worsening demographic outlook that imperils long-term economic growth.

The Chinese Communist Party, which came to power in 1949 under Mao, initially recruited peasants and workers, but has evolved to embrace markets and entrepreneurship under “socialism with Chinese characteristics” while retaining a Leninist model of authoritarianism.

On Monday, Xi presided over theatrical performances at the “Bird’s Nest” National Stadium in a show attended by thousands and that state media described as “epic”.

At the end, the audience rose to sing a song, “Without the Communist Party, There Would Be No New China.”

Tunisia’s President Kais Saied in a sudden move on Sunday dismissed the Prime Minister and the government and froze parliament.
Read more
Foreign

A priest told mourners at a memorial service Thursday for slain President Jovenel Moise that too much blood is being shed in...
Read more