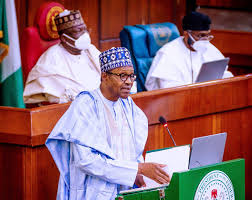 President Muhammadu Buhari has urged Nigerian youths to continue to remain resilient and never look back in pursuing their goals, EaglesPath Online reports.

He urged them not to get tired in the face of challenges, assuring them that they would achieve victory.

A statement in Abuja by the Senior Special Assistant to the President on Media and Publicity in the Office of the Vice-President, Mr. Laolu Akande, said the President was represented at the event, with the theme: Energising the Youth for Development: Inclusiveness, Governance, Security and Employment, by Vice-President Yemi Osinbajo (SAN).

“Wherever you are in this country, whatever you are doing, keep moving, don’t look back. You will win eventually. Keep moving ahead. Whatever the situation, ‘We Move’,” he said.

Describing Nigeria’s youths as “the country’s most strategic asset”, “the very best of us” and “our reservoir of hope and creative optimism,” the President assured them that his administration “will continue to support your efforts by creating an environment that enables the fulfillment of your dreams”.

He lauded the innovativeness and resilience of the nation’s youths, who he said were proffering solutions to social issues across the country.

President Buhari noted that the interests of Nigerian youths remain at the centre of policy making in his administration’s investment and development agenda.

Acknowledging the incredible potential, innovation and enterprise of Nigeria’s youths population, President Buhari noted the exploits in entertainment and music, sports, technology and other sectors.

He said: “Because of the labours of our youth, in addition to being home to the third largest film industry in the world, we are the epicentre of a global and Pan-African popular culture anchored to the dynamism of Nigerian creatives.

“There are also young Nigerians riding the crest wave of the information technology revolution, those who are pioneering new patterns of enterprise and wealth creation and, in the process, have established this country as the most vibrant innovation hub on the African continent. “Our tech entrepreneurs and innovators are not just applying their talents to profit-making endeavours but also seeking to address social problems.”

On the global recognition of the innovation of Nigerian youths, the President acknowledged the exploits of “Silas Adekunle, the robotics engineer who invented Mekamon, the world’s first intelligent gaming robot,” and “Max Chinnah, who invented the Genesys Cooker, a smokeless stove that addresses the problem of smoke pollution which kills an estimated 4 million people every year”.

He also named “people like Saadat Aliyu, who runs a tech hub in Kano, has developed an App for reporting cases of sexual assault”.

President Buhari added: “Only last week, the Canon Young Champion of the Year Award – which celebrates the achievements of young people around the world who are driving social and environmental change – went to Alabi Samuel Anjolaoluwa in the Under-21 category for his inspiring project, ‘Students of Ibadan,’ which shines a light on the struggles faced by under-served students in the city of Ibadan.

“I could also speak of Ejikeme Patrick Nwosu, an organic chemist who has invented a fire-retardant paint that could drastically mitigate the risk of fire outbreaks. How about outstanding young teachers in primary and secondary schools…?”