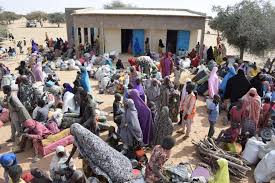 The draft, after its ratification, is expected to kickstart preparations for the repatriation of refugees from Niger and Chad.

“With a large number of refugees in Niger, Chad and Cameroon, Federal Government of Nigeria has officially initiated talks with the Governments of Chad and Niger to sign tripartite agreements similar to the one we have with the Republic of Cameroon.

“I am happy to inform you that we already have a draft copy of the Tripartite Agreement for Voluntary Repatriation of Nigerian Refugees in Niger and Chad Republics”.

The Minister, who was previously the Chairperson of the group, officially handed over the role to the new Commissioner, Iman Ibrahim.

Ibrahim sought the cooperation of all partners in efforts to bring back the refugees in safety and dignity.

She said: “Part of the governance infrastructure for carrying out exercise includes the Borno State Government and some selected Federal Government MDAs as well as the UNHCR, our invaluable Technical Partner, all of who have crucial roles to play.

“We need to work in synergy to ensure a successful voluntary repatriation in line with the Presidential directive”.