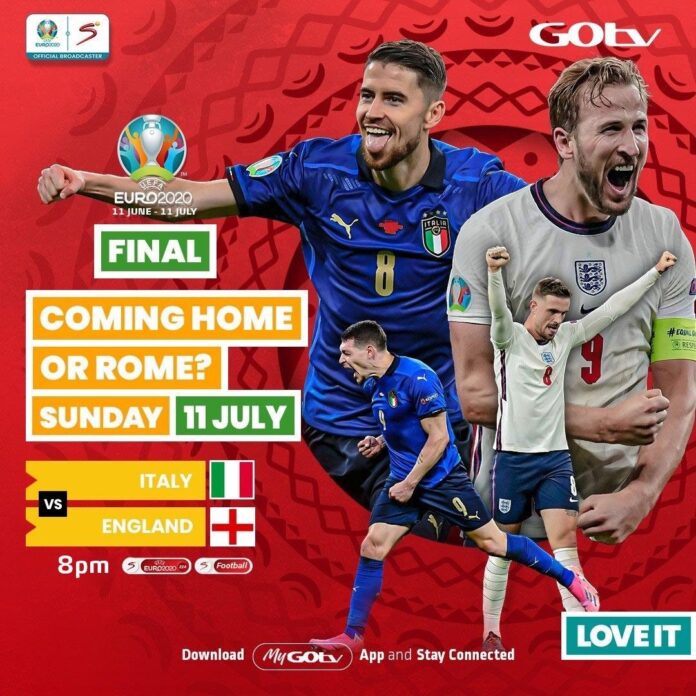 As the UEFA Euro 2020 tournament enters final run, DStv and GOtv customers get to watch all the action from the final match, live on SuperSport.

Italy have looked the pick of the teams through the course of the tournament, though they had to resort to extra time and penalties to finally overcome Spain in the first Semifinal on Tuesday night. An equaliser from Spain’s Alvaro Morata sent the game to a full 120 minutes, but a save by Italy’s Gianluigi Donnarumma from the same attacker’s penalty in the shootout proved the key difference between the rivals.

England’s semi-final also went a full 120 minutes, but a Harry Kane goal – scored off the rebound from a penalty saved by Kasper Schmeichel – ensured that they triumphed 2-1 over a brave Danish side which had given the tournament so much in the wake of Christian Eriksen’s collapse in their opening game against Finland.

The Three Lions are into their first European Championship Final and a first major tournament final since they won the World Cup 55 years ago. With home support at Wembley, England finally, truly believes that ‘football is coming home’.

Football fans will also enjoy pre and post-match analysis of the match by former Nigerian professional footballers and European stars, Jay-Jay Okocha and Joseph Yobo, as part of SuperSport extensive coverage of the UEFA Euro 2020 tournament.