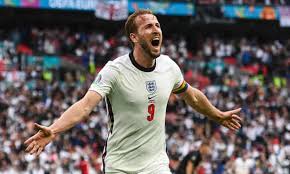 England captain Harry Kane said his side’s experience of losing a World Cup semi-final three years ago helped pull them through a nerve-wracking clash with Denmark to reach the European Championship final for the first time.

Kane scored the winning goal in extra time after his penalty had been saved by Kasper Schmeichel to spark wild scenes of celebration in front of 64,950 fans at Wembley.

England had fallen behind for the first time in the tournament when Mikkel Damsgaard fired a brilliant free-kick into the top corner.

But they responded immediately as Simon Kjaer could only turn into his own goal under pressure from Raheem Sterling.

“We said all along, we can talk about how we’ve learned from 2018 but it’s about doing it on the pitch,” said Kane. “We stayed calm, there was no panic.

“These games are about character, digging in and belief. This will just give us more belief going into Sunday now.”

England will face Italy in Sunday’s final with another huge home crowd on their side at Wembley.

“It’s going to be an amazing occasion for sure. As the game gets closer the excitement and nerves will kick in,” added Kane.

“It’s going to be a special day, but we need to make sure we are on the winning side.”

The winning penalty came about in controversial circumstances as Raheem Sterling went down in the box under minimal contact from Joakim Maehle.

“I thought it was a penalty,” said Kane. “I thought I should’ve had a penalty in the second half as well. It probably evened itself out over the game.”