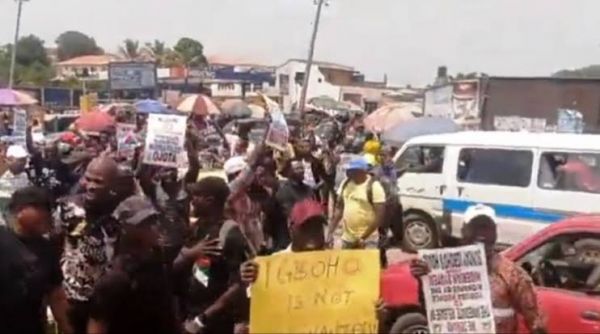 Youth from different states in the Southwest geo-political zone, yesterday, stormed Ibadan, the Oyo State capital, in protest against the raid carried out by the Department of State Security (DSS) and other security agencies on the residence of a Yoruba activist, Sunday Adeyemo, also known as Sunday Igboho.

The youth said the protest was sparked by the statement credited to President Muhammadu Buhari and issued by his Senior Special Assistant on Media and Publicity, Garba Shehu, where he commended the security agencies for arresting the leader of the Independent People of Biafra (IPOB), Nnamdi Kanu, and last week’s raid of Igboho’s house.

The protesters, drawn from Oyo, Ogun, Osun, Ondo and Ekiti States, also, demanded the release of Igboho’s aides who are currently detained by the DSS in Abuja, and that the government should rescind the decision declaring Igboho wanted even as they insisted on the creation of Yoruba nation.

The protest, which took off from the raided residence of Igboho was staged to Soka Junction, Challenge, Molete, and Olubadan palace, at Popoyemoja in Ibadan. There was heavy traffic logjam in the axis passed through by the protesters in Ibadan.

The protesters chanted as they moved: ‘Sunday Igboho is not a criminal!’, ‘Oodua Nation!’ ‘No retreat, no surrender!’, ‘Stop killing the Yoruba’, Release Igboho’s associates arrested by security agencies.’ The chants were also reflected on the placards carried by some of the protesters.

They were attended to by the Executive Assistant to Governor Seyi Makinde, on Security Matters, Sunday Odukoya, a retired Commissioner of Police.

Odukoya urged them to be orderly and not take laws into their hands. He also told them to put their demands into writing and present the formal document to the state government for necessary actions.