Human Trafficking : Spot The 5 Signs On how Traffickers Find Their Victims 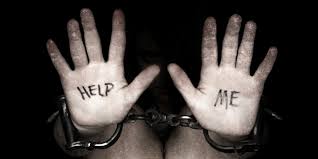 Human Trafficking is the recruitment, transportation, transfer, harbouring or receipt of people through force, fraud or deception, with the aim of exploiting them for profit.

Men, women and children of all ages and from all backgrounds can become victims of this crime, which occurs in every region of the world.

Avoid falling into the hands of human traffickers by learning to spot the signs today. And remember the saying: When an offer sounds too good to be true, it probably is.

What is human trafficking?

Human trafficking, simply put, is when a person is taken from one location to another with the intent of forcing or exploiting the victim. And it happens more often than you might think. There are at least 1.4 million victims of human trafficking living under coercion and exploitation in Nigeria, according to the International Organization for Migration. Yetunde Abraham was one of them; she was tricked by a close relative with an offer in Germany, she told VOA news. After agreeing to the offer, she was trafficked to Libya for prostitution to make money for her traffickers. She was there for six years.

Where do victims end up?

Although half of the several hundreds of thousands of Nigerians in Europe live in the United Kingdom, Italy is host to the second-largest group of Nigerians and is the most important destination for Nigerian victims of trafficking. According to IOM, the source of victims is predominantly from Edo State with Benin City identified as the main junction for prostitution-related emigration.

How can I spot the signs of a human trafficker?

Human traffickers often work together with family or community members of the victim, or people of authority to sell them.
They sometimes use romantic gestures to attract the victims, especially girls and women, to follow them on the journey. Women often end up as sex workers or get involved in other illegal activities as a result of their irregular migrant status.

Another characteristic of trafficking in Nigeria is that it is organized primarily by women. Many of the traffickers have themselves been trafficking victims. Women who fulfill the pact are free to earn a living on their own and often find it difficult to find work in Europe that is unrelated to the trafficking business.

A less well-known, but the growing problem, are the so-called ‘baby factories’, where women and girls are held captive to deliver babies who are then sold illegally to adoptive parents, forced into child labor, trafficked into prostitution, or, as several reports suggest, ritually killed. Baby factories are more common in the southeastern part of Nigeria, where security operatives have carried out several raids, including an operation in 2019 when 19 pregnant girls and four children were rescued.

It is important that you carefully scrutinize travel abroad opportunities to prevent yourself from becoming the next victim of human trafficking.