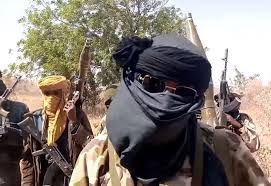 Bandits, who invaded Maraban Rido in the Chikun Local Government Area of Kaduna State on Monday and abducted students of the Bethel Baptist High School, Damishi, have reached out to the management of the institution to demand foodstuffs.

The hoodlums asked for food items such as rice, beans, seasoning and oil to feed the students.

A member of the school management, who confided in one of our correspondents on Tuesday, stated that the bandits said 121 students of the school were in their custody.

According to the school official, the bandits first called on Monday and allowed one of the students to speak to a top member of the school management.

It was learnt that they called again on Tuesday and allowed two senior students, a boy and a girl, to speak to a top official of the school.

It was gathered that the senior students confirmed that there were 121 of them with the bandits.

The official, who spoke with our correspondent said, “When the phone rang, the bandits first spoke to the member of the management. They said a senior student was directed to count the students in their custody and the boy confirmed that 121 students were being held. They also asked for food such as rice and beans as well oil to feed the students.

“Later, the senior student, who counted the abductees, said there were 121 of them with the bandits.”

The management of the school and parents of the abducted students met on Tuesday on ways to rescue the abductees.

This was just as the school management confirmed that 121 students were being held by the bandits.

Proprietor of the school, who is also President, Kaduna Baptist Conference, Ishaya Jangado, made the confirmation.

The meeting lasted several hours amidst threat by the parents to embark on another round of protest and block the Kaduna-Kachia Highway, where the school is located.

The parents, mostly women, had indeed blocked the highway before operatives of the Kaduna State Vigilante Service prevailed on them to abandon the protest.

The parents also held a prayer session for God’s intervention in the rescue of their children from the kidnappers’ den.

Shortly after that, Jangado confirmed to newsmen that no fewer than 121 students were in the custody of the kidnappers.

He said 28 students were “recovered” on Monday after the bandits attacked the school.

He explained that the total number of students in the boarding house was 154 and that 28 were recovered, while 121 were in the bandits’ custody. He, however, did not provide any explanation on the remaining five students.

He said, “For now, we know that we have 154 students in the school hostel and yesterday (Monday) after the exchange of fire between the soldiers and the bandits, we came to the school and recovered 28 students; some of them were hit in many places. In the course of being taken away, some of them escaped and they came back to the school.

“So, the total number of students we recovered yesterday (Monday) was 28 and today (Tuesday), by the grace of God, we got a call from the bandits and they assured us that our children are well and doing okay.

“In fact, we had the privilege of speaking with a few of them. They counted themselves in the jungle and they gave us information that they were 121, and when we put the number together with what we have recovered, we discovered that the number is exactly the same as the number of students we have in the hostel.”

‘No, we were caught unawares’

Facts emerged on Tuesday on how the bandits wrote the management on their intention to attack the school.

A parent, who confided in one of our correspondents, said the bandits actually notified the management that they were coming to attack the school.

The warning, the parent said, was ignored by both the guardian of the boys’ hostel and matron of the girls’ hostel when the students took the letter to them.

She said the teachers taunted the students for being eager to go home for holiday.

She stated, “The bandits actually wrote the school a letter on Sunday that they were going to attack it on Tuesday before striking on Monday.

“The students took the letter to their guardian and he said to them that they didn’t want to be in school and that they were trying to look for an excuse to leave school.

“They took the same letter and gave it to the matron of the girls’ hostel; she also acted the same way. The children in their innocence believed them and never said anything until the bandits struck on Monday. The bandits notified the school of their coming, but the students acted otherwise.”

However, Jangado dismissed the claim, saying it was a pure lie.

He said the bandits took the school management unawares.

“That is a serious lie. That is wrong. These people (bandits) took us unawares, because we have our plans on security matters, how we can ensure that the students write their exams and go. So, there was no letter or any information about their coming,” he stated.

He also said the management of the school would be willing to seek out any individual, including the controversial Islamic cleric, Ahmad Gumi, for intervention to secure the release of the students.

When asked if he would seek Gumi’s intervention, Jangado said, “Well, if something is burning in your hand, whatever you can touch to make your hands cold, you will touch it.

On if the management would seek the support of the National Baptist Conference, the national body of the church in Nigeria, Jangado noted that the body would be informed of the attack but it would not be involved in negotiation or payment of ransom should the need arise.

One of our correspondents, who visited the school premises on Tuesday, was told how the bandits tricked the students to follow them into the bush.

According to a source, when the bandits succeeded in breaking into the school through “the broken perimeter fence,” they headed straight for the boys’ hostel and deceived the students that they were military personnel on a mission to rescue them from bandits.

He said, “When they entered the various hostels, one of the bandits spoke in English to the students that they were on a mission to rescue them from bandits. He said bandits were on the way to the school to attack them. The bandits asked the students to come out and follow them. It was after they came out that they sensed that something was wrong and those who could escape did so and others were taken away.”

Nigeria has become a wasteland, says CAN

Nigeria under the watch of President Muhammadu Buhari has become a wasteland devouring its inhabitants, Christian Association of Nigeria has said.

The body also called on the international community to assist Nigeria, as it did for Syria, to fight nationwide banditry and insecurity.

President of CAN and immediate-past President of the Nigerian Baptist Convention, Samson Ayokunle, said this in a statement, while reacting to the kidnapping of 121 students of the Bethel Baptist College, Kaduna.

Ayokunle said the situation in Kaduna State “has become quite terrible because of the uncouth, unbridled and acidic statements credited to Governor Nasir El-Rufai, who appears to be talking too much than acting!”

According to him, Buhari should caution El-Rufai against making reckless statements.

The statement read in part, “It is a sin and a crime against humanity to have zero regards for the lives of others or be unable to provide security for citizens.

“Kidnapping and abduction are now a thriving business in Nigeria and it is almost becoming synonymous with the leadership of President Muhammadu Buhari. It is very evident by each passing hour that this present administration is just paying lip service to the issues of security.

“Whereas, provision of adequate security for all Nigerian citizens was one of the campaign promises of Buhari in the 2015/2019 general elections and the major reason people voted for him was being an ex-military man, the administration has failed woefully to keep campaign promises

The Federal Government on Friday revealed an alleged sponsor of self-acclaimed Yoruba activist and the major pioneer of the agitation for Oduduwa...
Read more

President Muhammadu Buhari wants nothing but to see that peace and unity reign in all parts of the country, the Special Adviser...
Read more

I’ve never thought of reducing my boobs, they are my selling points – Ruth Eze

Actress, Ruth Eze, has revealed that she has never thought of undergoing a breast reduction procedure because they are her unique selling...
Read more
Load more