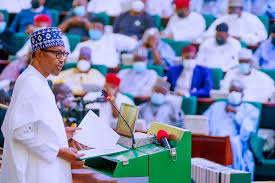 A N19.49 trillion budget is being proposed by the federal government for 2023. The majority of the funds will be borrowed.

The federal government intends to borrow N11.03 trillion to pay for the budget, and to acquire the necessary funds, it proposes to sell off a number of assets.

Of the N19.47 trillion budget, the government only expects to generate N8.5 trillion.

The government of Buhari intends to borrow N7.4 trillion from the local market and N1.8 trillion from international organizations to pay for the enormous budget. Additionally, the FG anticipates N1.7 trillion in multilateral project-related loans and N206.1 billion in profits from privatization.

The fiscal responsibility Act’s suggested borrowing cap is considerably exceeded by this borrowing plan. According to the legislation, the deficit cannot be greater than 3% of GDP. But this program represents 5.01% of the GDP.

The legislation does, however, grant the President the authority to do so with the National Assembly’s consent if he or she deems there is a good reason to.

But the president has steadily crossed the deficit with different justifications. In 2021, it was 3.5% with the argument that there is a need to finance COVID-19 recovery. In the past, the administration premised its argument on funding the defence sector due to insecurity.

This time, the government is making petroleum subsidy the central argument for the huge deficit. However, it’s worth noting that, in this current proposal, subsidy will only be paid for 6 months.

On Monday, when the Minister of Finance, Zainab Ahmed appeared before the House or Reps Committee on Finance, she lamented that oil theft has reduced the capacity of the government to fund the budget.

She said the inability to produce sufficient oil has made it impossible to meet the crude oil for PMS swap deal as the government is now paying cash instead of crude oil.

She said, We need the crude to undertake the DSDP arrangement where crude is swapped for PMS. It means we have to pay for PMS ourselves.

Furthermore, Nigeria is unable to meet its OPEC quota of 1.86 million barrels per day.

It would be recalled that the federal government recently signed a N4 billion monthly pipeline surveillance agreement with Government Ekpemupolo, better known as Tompolo.

It is a reversal of the initial stance which saw the cancellation of the contract months after President Buhari assumed office.

According to the Debt Management Office (DMO), as at the first quarter of the year, the debt of the country stood at N41.6 trillion.